IFBB Pro Mike Ferrer – by Vince Pe
A few months ago, I got to spend time with my good friend, IFBB Pro and OPA Judge – Mike Ferrer. Having the privilege of managing Mike years ago, I happily watched him accomplish his fitness goals and am delighted to see his experience and expertise being utilized as a judge.
Easily one of my favorite athletes to work with, I managed to get some time with in with Mike after the Toronto Pro Show to get this Strong-Athlete exclusive.
1) Mike, we’ve known each other for years and you had one of the most pleasing physiques in the OPA. How did your interest in competitive bodybuilding begin?

Thanks Vince! My interest in competitive bodybuilding actually began while I was in my first year of university.  I began to notice muscular gains in my physique, as a result of all the strength training I was doing for track and field…and I liked it!  I started reading the “MuscleMags” and the “Muscle and Fitness” magazines.  I would see bodybuilders like Shawn Ray, Kevin Levrone, Flex Wheeler and think to myself, “These guys have dope (90’s term) physiques!”

Although running track was my true passion, it wasn’t paying the bills.  Coupled with the fact that for two years straight, I sustained a season-ending hamstring tear just prior to (Track) Nationals, forced me to re-evaluate my athletic career.  That same year, I began working part-time at a fitness club (That’s where I first met you Vince!).  This transition allowed me to begin focusing more on bodybuilding, while still enjoying a pay cheque at the end of the day.  I guess after track, I still needed a competitive outlet and bodybuilding seemed to be a perfect fit.  I guess you can say that my transition into bodybuilding was a natural progression!

2) Who is your biggest inspiration in fitness/bodybuilding and why?

When I first started bodybuilding, there were athletes whose physiques I admired and appreciated.  They included the likes of Kevin Levrone (circa 1993), Shawn Ray, Lee Priest and Flex Wheeler, all of who were from the 90’s!  It seemed commonplace back then to have a waist under 34″, something rarely seen today.  Now as far as my biggest inspiration and in this case, also my biggest influences, I would have to say my late friend Tom Hall (2001 North American Overall Master’s Champion) and the late great Darren Oliver (one of Canada’s best trainers of all time), both elicited the greatest impact on me as an athlete in this sport.  Tom Hall, who at the time was under the tutelage of Scott Abel (strength and conditioning coach), took the time to “show me the ropes” of bodybuilding.  He not only showed me how to train smart, eat right and even pose correctly, he was a great friend outside of the gym as well!  Much of the same can be said about Darren Oliver.  Darren was paramount in my victory at the 2011 Canadian National Bodybuilding Championships!  In training me for that show, he implemented exercises (sometimes unorthodox in nature) specific to my structural needs, which I believe was pivotal in capturing the Overall Title!  In spending but mere months with Darren, I learned how to better myself both as a trainer and as an individual, on how I approach training and on how I approach life. 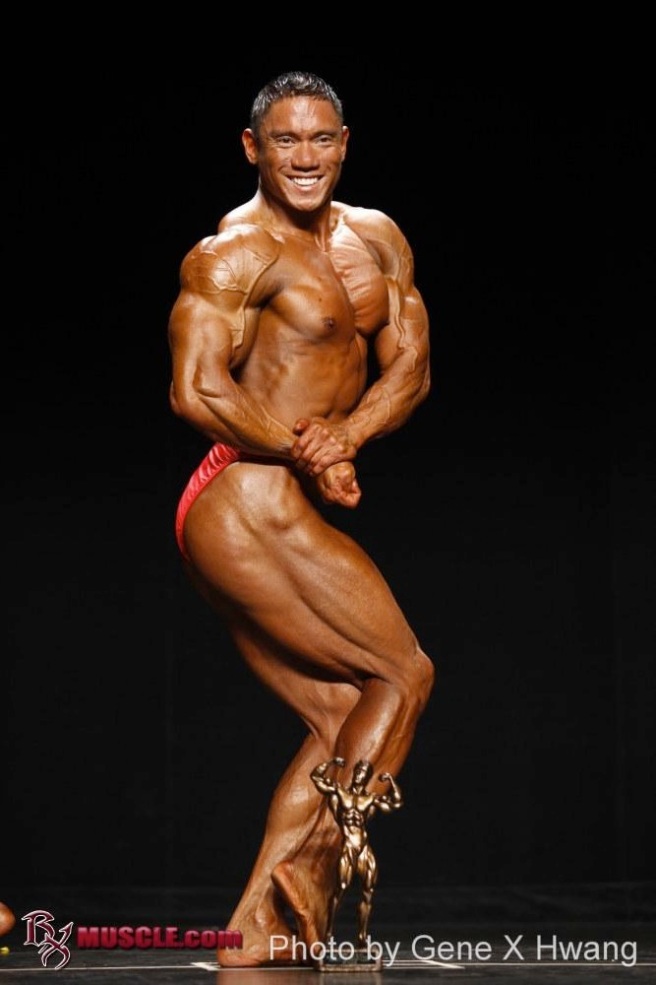 3) You received your coveted IFBB Pro Card last year. What was that feeling like? Many competitors will never know.

Nevertheless, this is how those final moments on stage transpired in my mind:  With only the top 3 finishers waiting to receive their awards, the MC first announces the name of the 3rd place winner and I’m thinking, “Okay, that’s not me.  Great!  I just dodged the first bullet!”  And then when the 2nd place winner’s name is announced and it’s still not me, I’m hit with this overwhelming sense of relief, joy and feeling of closure.  In short, I felt that I had achieved self-actualization, the highest form of gratification (according to Maslow’s hierarchy of needs) a human being can experience but not all human beings are able to achieve in one’s lifetime.  So there I am, although grateful for the win, kind of feeling satisfied but not overly emotional.  It wasn’t until during the actual 6-hour drive home that it hit me.  I just started thinking, “I just won a national title!  I’m #1 in a nation of 30 million!”  And then the tears came.

4) You retired immediately after your win. Can you tell us why?

Great question.  The competitive bodybuilding physique has a definitive lifespan.  Generally speaking, bodybuilders peak between 35-40 years of age and then it’s usually maintenance at best from there on in.  At 36 years of age, I know that the amount of size that I can still put on is limited, just based on how many more years I have to make it happen.  After 15 years of competing, I really have nothing left to prove to myself, nor to anyone else in the sport.  I won my class at nationals; it really can’t get any better than that.  However, it could get worse if I competed again and ended up losing.  That would be an “ouch” for me!

I have a family and as everyone who’s reading this knows, contest dieting is harder on them, than it is for the actual athlete who’s on the diet!  I owe it to my girlfriend and my 9 year old son, to devote more time with them and not have them be subject to pre-contest mood swings and on-the-dot eating rituals.  Also, contest prep is damn well expensive!  For the 2011 Nationals, I had an on-line coach (Scott Abel), a trainer (Darren Oliver); I was working with a sports psychologist, a chiropractor/ART practitioner and a massage therapist!  That’s not including expenditures in the departments of groceries, supplements, tanning and travel expenses!  And so yeah, that’s basically why I’ve retired from competitive bodybuilding.

5) I understand you are staying heavily involved in the industry as an OPA Judge! What an accomplishment. Why did you choose to go down this route?

A few months after my win, I contacted Ron Hache and Al Cook of the Ontario Physique Association.  I told them that I was grateful for all of the support that the OPA has shown me throughout my competitive career.  I mentioned to them that I would like to reciprocate this generosity by volunteering my time at The Toronto Pro Supershow and perhaps acquiring my certification as an OPA judge.  The rest was history!  Judging is my way of giving back to the bodybuilding community, for all of the opportunities that it has granted me.  Also, I think that judging will keep me amerced in a culture that has become the framework for the lifestyle I maintain today! 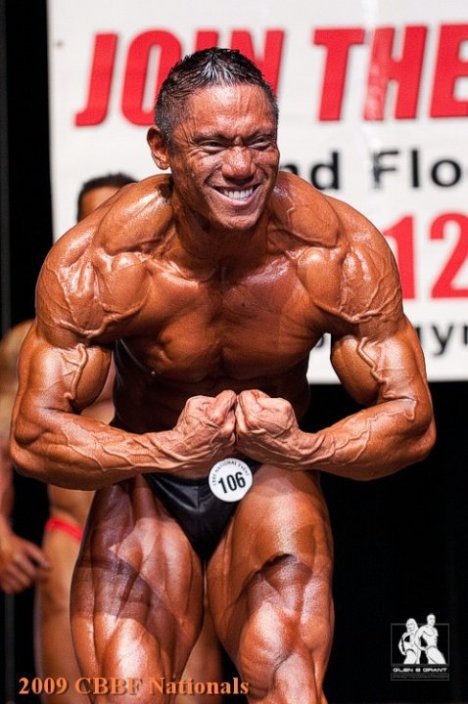 6) Based on the amazing year we’re having so far, which athletes do you see making a splash at this year’s Nationals?Wow.  Really hard to say.  There are going to be a lot of great athletes vying for their pro cards this year.  Multiple divisions as well (bodybuilding, figure, fitness, bikini, physique, 202 and under).  Some of this year’s anticipated favourites haven’t even competed since last year’s nationals!  I mean in my experience, you just never know who’s going to come out of the woodwork.  The phenoms and freaks you see on Facebook with the largest number of “followers”, isn’t necessarily going to take home the title.  Looking good in your underwear, while standing in front of your bathroom mirror and taking a picture with your Blackberry, doesn’t always translate to a winning physique on stage.  Having said all that, my boy Jerome Bravo (also a former disciple of the late Darren Oliver), will be very hard to beat in the super-heavies if he hits his conditioning.  He carries a lot of mass on stage.  Hopefully he can nail it this year and come away with his pro card!

7) What are your thoughts on Phil Heath as the new Mr. Olympia?

I like Phil Heath as Mr. Olympia.  It was a well-deserved win for him in 2011.  Phil is a great ambassador for the sport of bodybuilding.  He constantly promotes it (and himself) through multiple guest appearances.  Phil is very approachable and he gives the IFBB a fresh, new look!  I also like the package he brings on stage.  He carries a lot of size but yet; he is able to display outstanding conditioning.  One of the attributes that sets him apart from most other Olympia competitors, is his ability to maintain a structurally sound physique in the midst of all that heavily muscled framework.

8) As a judge, what are your predictions for this year’s Olympia?

9) Mike, I hear you’re sharing your knowledge in fitness. Can you tell us about your new business in training and coaching others?

I’ve been training clients since 1998 but I feel that my “game” has really evolved in the last year or two.  Having had the experience of working with some of the world’s foremost experts in the area of strength and conditioning (Charles Glass, Scott Abel, Darren Oliver), I feel that I’ve been able to hone in on my own skills as both an athlete and as a personal fitness trainer.  Collectively, I’ve taken my post-graduate knowledge in kinesiology, health and physical education and amalgamated it with my real-world experiences in having captured a national title!  Since my win at Nationals, I’ve expanded my clientele base to include even more men and women for whom competition (and winning) is a goal!  For more information on these and other services, you can log onto: www.michaelferrer.ca (shameless plug)

10) Where are we going to find you judging next?

Ah, good question.  Hopefully I’ll have the opportunity be judging most of the Regional shows in Southern Ontario.  I’ll be sure to keep you posted!

Thank you for this interview Vince and congratulations on your recent engagement!  It was great catching up on things! 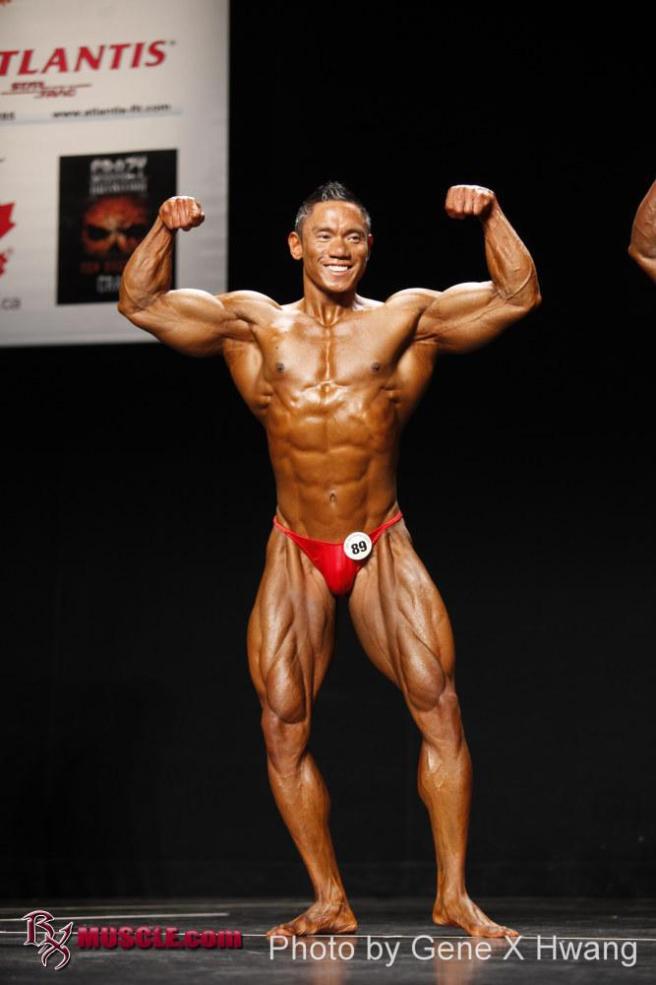